A recent study (1, 2) showed that essential oils reduce blood pressure and heart rate - but only if they are used for 15 - 60 minutes at a time. There is evidence that they reduce heart rate, but they can cause other issues (asthma, for example) in longer doses.

Aromatherapy is often touted to help reduce anxiety. The National Institute of Cancer (NCI) says this about it:

A large body of literature has been published on the effects of odors on the human brain and emotions. ... Such studies have consistently shown that odors can produce specific effects on human neuropsychological and autonomic function and that odors can influence mood, perceived health, and arousal. These studies suggest that odors may have therapeutic applications in the context of stressful and adverse psychological conditions.


The NCI (3) looked at a research done with cancer patients using aromatherapy to treat anxiety and other symptoms of cancer. The studies, which included children, show that aroma therapy can be effective - and especially when combined with massage. Here are some of the results. The full results are here.
As noted above, essential oils should be used for only 15 - 60 minutes at a time.

For more information on essensial oils and aromatherapy go to:

Researchers at Bringham Young University showed that children with autism hang on to the association of fear for a particular object long after other children have let it go. In a series of trials, children were given a puff of air in the face after seeing a yellow card. All of the children registered fear when shown a yellow card. At some point the card associated with the puff of air was switched to a differerent color. Typical children figured this out quickly and soon lost their distrust of the yellow card. Children with autism continued to be fearful of the yellow card long after the others. The length of time they stayed fearful was related to the severity of thier autism diagnosis.

The authors conclude that this heightened sense of fear ("anxiety", in their words) is not just associated with autism but is an integral part of it.

References:
1. Synopsis can be found at Science Daily: Mind and Brain

Do you REALLY think he has Asperger's?

Check out New York Magazine article, Are You On It?  .... If so, you're in good company.  From Asperger's to "Asperger's", how the spectrum became quite so all-inclusive about ? Finally someone shaking a finger at those who would lightly diagnose husbands, colleagues, politicians or themselves with the disorder.
Posted by Teresa at 6:49 PM No comments:

Just received an email about a new sleep product from iLs that helps with auditory sensitivity. It is priced at $295 and available for purchase by parents. It is described as follows:

The iLs Pillow delivers processed music through a vibration which is carried by the body (our bones are great conductors). The music travels internally to the bony area surrounding the inner ear, and is audible only by the user. It is used to de-senstitize those with auditory sensitivity, reduce anxiety and improve sleep. 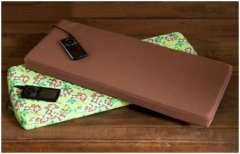 Posted by Teresa at 5:10 PM No comments:

Patterns of Early Development in Autism

Here's my second book. Click for more information or to order.